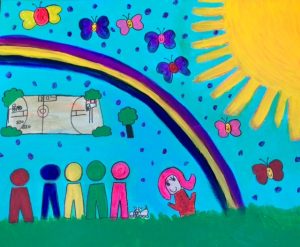 Any day at the Arts For Life art table is magical. But when the art table is full of growing, thriving former NICU (Neonatal Intensive Care Unit) patients, all of whom are collaborating on one bright, beautiful painting? Well, that’s about as magical as it gets. 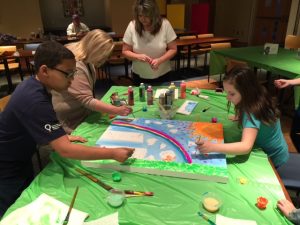 When the Carolinas HealthCare Foundation approached Arts For Life Charlotte’s program director Sarah Ness about working with these very special kids on a collaborative art project, Sarah jumped at the chance. She sat down with four kids who came into the world with a myriad of medical needs, and were treated with the utmost in excellent care NICU at Levine Children’s Hospital. The kids ranged in age from 5 to 12, and all had the excellent neonatal team at Levine to thank for their thriving health.

Sarah began the project by facilitating a conversation about “what hope looks like.” The children were brimming with ideas, and with Sarah taking notes, they formed a collective vision for their artwork. Next, came the fun part: an afternoon of painting! Even some of the parents joined in, and the atmosphere was positive, relaxing, and celebratory. One parent even said she wished she’d had art available to her when her child was in the NICU years ago, because it was so helpful in reducing her stress.

The finished work – a brightly-colored super-size canvas – was auctioned off at the Carolinas HealthCare Foundation’s gala fundraiser in May, and brought in $1,300 to benefit the NICU at Levine Children’s Hospital. Not only that but, one neonatal physician was so impressed with the work that he “commissioned” another original painting, in effect doubling the amount of money raised through the project!